skip to main | skip to sidebar

Blogger has been good to us, friends and Hiatians, but it's time we got our own place. So move your vompy selves over to www.savehiatus.com as fast as you can go, and join in the celebration of television's most underrated masterpiece.
Posted by C. A. Bridges at 8:07 AM 11 comments:

Dunno how long before some wikimanager stomps on this like the shred of hearsay that it is, but at the moment Hiatus is at Wikipedia. I urge you to edit it to your heart's delight.

12 Things You Never Knew About "Hiatus"

1. The idea for ship's communications to be in Esperanto was the suggestion of child actress and cast member Julia Twee ('Arcus') Bohammin. It wasn't discovered until after the voiceovers had already been recorded that she had been kidding.

2. Show creator Manny Ulrich demanded that the ship not only be completely built so as to enhance the illusion, but that it actually be launched into space and shot on site. It is believed that the cost of approximately $26.1 billion per episode (plus catering fees) may have had something to do with the show's early demise.

4. Brent Spiner's guest appearance in episode six, "Winds of Change, Yo," actually happened accidentally when he wandered onto the set on the way to the studio commissary. He was a good sport about being unexpectedly tortured by the Rllrians, though, and even dropped the lawsuit after the studio covered his medical expenses.

5. The show's theme song has been translated into 37 different languages. The lyrics, written by Ulrich in a drunken stupor, make no sense in any of them.

6. Darnell ("Cygnus Alpha") Lee was determined to do his own stunts and even told one interviewer, "If my butt's gonna be blown off, I want the audience to see it!" This was made ironic when an accident involving a Crushborg inadvertently removed half of Lee's left buttock. It was later replaced with a prosthetic replacement and Cygnus Alpha wielded his dreaded hyper-laser cane for the remainder of the show's run.

7. The high-pitched Rllrian language was devised by linguist Paul K. Bunford, who based it on traditional Himalayan shepherd profanity. Some Hiatus uberfans speak it fluently, for some reason, and have even translated the entire Def Leppard songbook into Rllrian verse (except for "High 'n' Dry," which bites).

8. The role of "Hy" was turned down by Christina Ricci, Lindsay Lohan, and Bjork before being accepted by veteran character actor Hank Robinson. Robinson's makeup takes nearly three and a half hours to apply, not counting appliances.

9. Because of Ulrich's deep and abiding love of Shakespeare, a line from the Bard is included somewhere in every episode. In most instances this is a subtle in-joke for the fans, but even the show's most loyal supporters admit that the episode "A Mid-Parsec Night's Dream" (featuring Joe Morton as Oberon Prime, king of the Space Fairies) was pushing it.

10. To keep up with changing viewer interests -- and to make the show eligible for as many Emmy categories as possible -- the show's format was changed three times during its limited run. The writing staff rose to the challenge, offering deep psychological turmoil amongst the crew, brought out by secret Rllrian germ warfare, to explain why the ship suddenly broke out into music/variety.

11. One of the most shocking and dramatic scenes from the show came about due to a conflict between the executives. While Ulrich was away on a scouting trip, producer Susan Mastler ordered a scene between MacMillan (ship's engineer) and Greta (ship's ombudsman) changed to occur in space, claiming "it would be more romantic that way, with stars and stuff." A furious Ulrich responded by having the scene CGed in post-production to be scientifically accurate, resulting in the violent romantic deaths of the star-crossed lovers from ruptured lungs, exploded gastric systems, radiation burns, asphyxiation, and, coincidentally, the highest ratings the show ever received.

12. When the show's cancellation was announced, Hiatus fans picketed in the streets for 46 straight hours to no avail, partly because the decision had already been made and partly because they were in front of the wrong studio.
Posted by C. A. Bridges at 7:05 AM 10 comments:

It's time to put your keyboards where your mouths are, odd though that may sound. The direction that the Hiatus storyline was taking left us with some tantalizing hints about things to come, and I want to see them! We can't depend on the networks or the movie studios to pick it up -- although I hope they do, and I urge you to get those petitions out -- so its up to us to pick up the slack. As Manny Ulrich, the creator and director of Hiatus famously said when asked what fans should do now that the show was cancelled: "Write fanfic! Just don't let me see it or I'll whip a box of lawyers on you so fast it'll knock your plastic pointy Rllrian noses off."

Ha ha! We love you, Manny! So we want your fanfic. What happens next to the crew of the Venture? What is Scipola's dark secret? What happened in the deleted love scene in the crew's cafeteria? We want to know!

Submissions should be under 500 words long can be posted here. Anything longer, post it at your own website or blog and send us the link. I'll be selecting Bestest Action, Best Crossover, and Vompest Story.

Start your keyboards! You might want to get them off your face, first. Vompy!
Posted by C. A. Bridges at 7:15 AM 8 comments:

I know, I know, you're looking at the title with confused fury. How could I not want to fight for a show that's meant so much to so many people?

Well, I do. But does anyone else?

Why do you want to join the Hiarchy and demand that Hiatus be brought back? What did the show mean to you? Why this, and not some other show? In short, why are you here?
Posted by C. A. Bridges at 12:00 PM 18 comments: 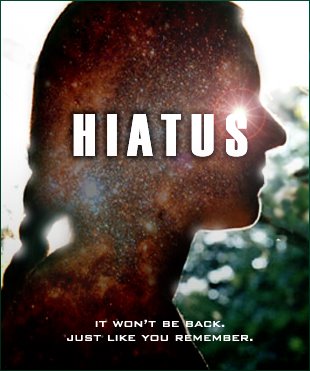 Well, by now we've all heard the news. Hiatus, the most ground-breaking new show in years to never be seen on television, is no more.

We can't let this happen.

Too many good shows have fallen away due to poor scheduling, inadequate advertising, or networks just not "getting it". We the fans have to step up and get the word out, and it begins now.

Tell you friends. Tell your family. Stop people on the street and tell them. (Save Hiatus will not cover legal fees.) And tell the studios we want this show back!